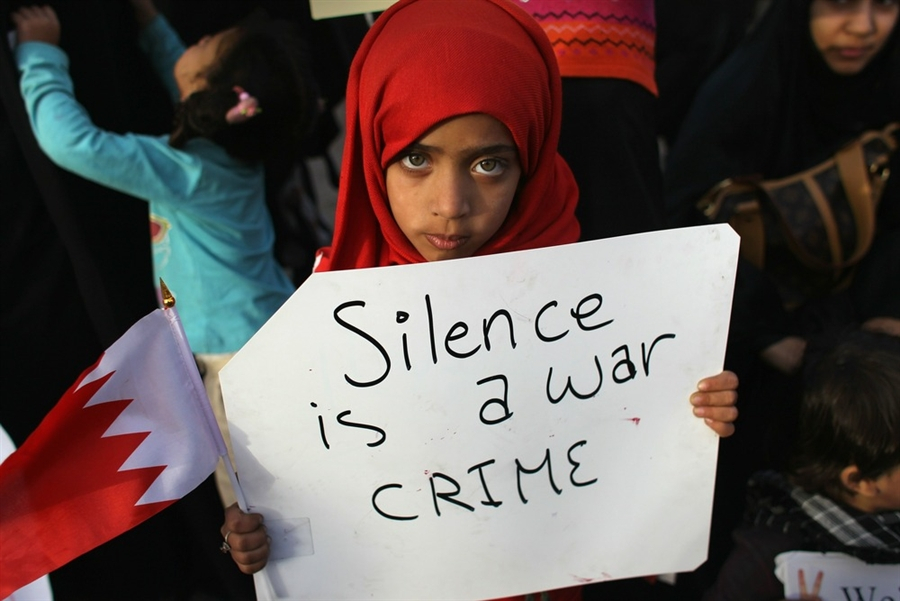 He is only 18 months old, but he had to pay the ultimate price for being born in a country riddled with hate, repression and criminality of a regime that has adopted revenge as the main weapon against its opponents. The 18-months old Sayyed Hussain Sayyed Isa, from the town of Nabih Saleh, died as a result of inhaling excessive chemical gases fired on his home by the Alkhalifa security forces. The child developed complications in his lungs that led to gradual deterioration of his health until he succumbed to death. His parents were devastated, so were all Bahrainis and freedom-loving people who curse a world that tolerates such criminal regime.

Ali Al Mawali, 21, is still in a critical condition, fighting for his life one week after he had been shot by members of Alkhalifa death squads. Last Friday he was hit at close range with a rubber bullet straight into his head. He sustained serious brain damage and had to undergo two serious operations. He sustained a fractured skull that caused serious brain damage. As he lay unconscious the regime formally charged him with participation in unlicensed congregation. A young man who tried to save him was arrested. Sayyed Hadi Ibrahim was kidnapped from the scene and nothing was heard from him until few days later. He was taken to Alkhalifa court which ordered his detention for 15 days for taking part in anti-regime demonstrations. He has been subjected to severe torture at the Dry Dock torture centre.

A Bahraini artist has been arrested and tortured by the Alkhalifa regime. Yasser Nasser was detained after taking part in a peaceful demonstration in Manama. Sayyed Yousuf Al Mahafdha, a senior human rights activist said on his twitter that the artist was taken to Manama police station and tortured by Timony and Yates men.

In a sign of hope that the international community has finally woken up to face the challenge of the Bahrainis human rights crisis, 27 countries have issued a comprehensive statement condemning the Alkhalifa regime for its brutal treatment of Bahrainis and demanding that it stopped serious violations of human rights. “We are particularly concerned about the consequences faced by those who protested for democratic change in a peaceful manner. We call upon the Bahraini government to fully respect their rights of freedom of expression, peaceful assembly and association and especially to ensure the protection of Human Rights Defenders,” reads the two-page statement. It also expresses its desire for Bahrain to agree on a comprehensive cooperation plan with the Office of the High Commissioner for Human Rights, plus a permanent presence for an OHCHR office in Bahrain.

The statement, sponsored by Switzerland, has been signed by all EU members except Britain, and several Latin American countries. The USA and Arab countries refused to endorse it. It calls for the release of all political prisoners including the prominent leading figures such as Abdul Wahab Hussain, Hassan Mushaima and others. This is an international indictment of a regime that has relied heavily on the unwavering protection by UK and USA. Both have refused to sign the document.

Meanwhile, the revolutionary fervor in the country has continued with even more determination to pursue the goals of the people including the right to determine their destiny, write their constitution and elect their government. Every night at least 15 demonstrations have taken place in various parts of the country with participation from men and women. Chemical gases are used systematically not only against demonstrators but also people’s houses. More than 40 people have died as a result of inhaling these lethal gases.